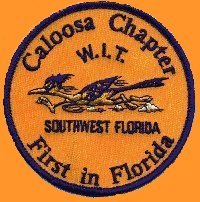 The Caloosa Winnies accepted the invitation from the Space Coast Winnies to have a joint campout weekend April 12 – 15, 2007. Buttonwood Bay RV Resort near Sebring Florida was the destination. We had a combined group of 26 coaches to enjoy the beautiful weather, and wonderful resort! Don & Diane Hawthorne along with Jerry & Nancy Miller were co-hosts.

Thursday Happy Hour began at 4:00pm, followed by a spaghetti dinner including dishes prepared by the members. Since this was the 2nd campout our groups have had together we shared stories and travels and had a great reunion! We had some guests for the weekend, John & Vicki Schaefer, Ron & Rita Webster, Paul Revell who is a former Caloosa member, Sandy & Frank Bertolan who are friends of our member Kathryn Griffin, and our Winnie Gators State Presidents, Dan & Linda Tuzzolo.

Friday morning was our Potluck Breakfast and what a variety of food! After everything had been eaten our attention turned to the shuffleboard tournament next on the agenda. The courts were the best we have ever played on, with shaded areas for players and observers. Jerry Miller explained the rules of our modified tournament that teamed up both skilled and non-skilled players. The object was to learn the game and have fun along with some competition. The winners were First Place “Team Navion” Jane O’Neill and Frand Bertolan, Second Place “Team Impulse” Iva Volkmer and Charlie Zucker, and Third Place “Team Outlook” Ellen Zucker & John Schaefer! CONGRATULATIONS to our winners! They were presented with ribbons, medals and prizes later that evening at dinner.

In the afternoon one of the optional activities was to visit Henscratch  Farms Vineyard and Farm which was a fun place. Wine making is popular in Florida and we shared in the process of wine making, walking around the grounds and even picking a bucket of strawberries fresh off the vine. The strawberry ice cream was also very refreshing along with browsing in the wine shop full of items to purchase.

Dinner was held at the recreation hall, Chicken and Wild Rice was the main course along with dishes to compliment from the members. After dinner it was time for the Winnebago Races! 2 tables were set up lengthwise to make 6 lanes marked off with tape for the toy “Winnebagos” to race on! Linda & Dan Tuzzolo were the “drivers” moving the coaches as the “dice rollers”, Ellen & Charlie Zucker, called out the numbers. The race fans had bet their quarters and we were off to the races! Kathryn Griffin was and excellent cashier taking the money and making out the betting slips. Jerry Miller kept track of the odds and payoff for each race. It was a fun time, enjoyed by all!

Saturday morning some of the residents of Buttonwood Bay held a breakfast for us, pancakes, biscuits, gravy, bacon, sausage, eggs, a big smorgasbord full of choices! At 10:00am each chapter held their business meetings with talk about GNR and the upcoming May State meeting. The Caloosa Winnies were PROUD to welcome Ron & Rita Webster as new members during the meeting. The afternoon was open for choices, some attended a tractor pull at a nearby park, some enjoyed the pool area, some took naps or went shopping. Happy Hour was held at 4:00pm and soon we were off to dinner in Sebring at Homer’s Restaurant. What a buffet was before us! GREAT food and service.

Later in the evening Buttonwood Bay held a “prom” night which some of us attended. They had music, decorated tables, wore dresses and outfits from proms past, and carried on traditions like kleenix flower corsages. They really had a good time going down memory lane to say the least. Some of members chose to play cards and games, so everyone had choices.

Sunday morning we had a breakfast of bagels, donuts, muffins, fruit, a nice variety of food once again. Soon it was time to leave, the weather was threatening to storm so we were anxious to get out ahead of what could be coming!  MY THANKS to Diane & Don who worked really hard to make this a great weekend – we really did enjoy being with your group! We decided to make this a joint campout in April 2008 once again, at Buttonwood Bay.

The Caloosa Winnies invite anyone traveling in our area to PLEASE feel free to join in on the fun at one of our campouts! Look in “Who’s Inviting Travelers” for our schedule. We LOVE visitors!